The agency for Harley-Davidson created very powerful imagery in the new ad campaign "Cage Free Humans"...you can say in Radio, "Imagine for a minute what the world would be like if everyone were living in cages..." But actually SHOWING it really brings the idea home. This is how to use TV.

Posted by Dana Sanchez at 9:06 PM No comments:

I hate Miracle Whip, but I love this ad - Via Marketing Beyond Advertising 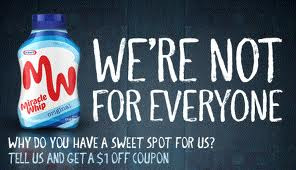 Just like that, you’re captivated by a high-impact, First Mental Image (FMI), which is critical when marketing something as ho-hum as a condiment. C’mon, admit it, you weren’t expecting to hear unpleasant remarks about Miracle Whip, were you?

But that’s exactly what you got, and it snapped you to attention.

Here’s the thing: Far too many ad writers would have led with a positive FMI. The preferred route would have been to replace the word “hate” with “love” in the ad’s opening line. But that wouldn’t have caught the attention of a gnat, and the ad would stumbled out of the gate.

Now before we move on to the message, know that your FMI must be more than just an attention grabber. A solid FMI must also be relevant, and set the correct tone for want you want your audience to feel. And as an ad writer, you must be careful when conjuring up a negative emotion such as hate.

That said, the main idea that Miracle Whip introduces with its FMI isn’t hate… it’s polarity, which sets the tone for the rest of the ad, brilliantly.

Miracle Whip isn’t for everyone. Admittedly, you’re either gonna love us or hate us. That’s okay. But no matter your preference, don’t sit on the sidelines. Try our product and choose one side or the other.

Society is spellbound by polarizing issues and figures in pop culture. Rush Limbaugh and Brittany Spears anyone?

Miracle Whip is no different. Anyone who has ever tried this sweet and creamy concoction can tell you whether they love it or hate it. There’s no middle ground. None.

The ad even features two polarizing celebrities: Political consultant and commentator, James Carville, and one of the goons from the television show, Jersey Shore. (And I’m not buying for a minute that this guy DOESN’T use Miracle Whip as hair gel. Just look at his shellacked dew. I dare you to tell me differently.)

A fresh dose of honesty also helps Miracle Whip cut through the clutter and noise of advertising to grab your attention. Reminiscent of Domino’s Pizza recent “Our Pizza Sucks” advertising campaign, Miracle Whip tells you what you already know to be true. In other words, the company doesn’t try to arm-twist you into believing that everyone loves its product. A move that boosts its credibility.

Miracle Whip’s ad is fresh and fun. It uses humor, and yes, even some sexual undertones, in a way that isn’t at all irrelevant or distracting. That’s rare in today’s advertising.

Switching back and forth between a “love” viewpoint to a “hate” viewpoint keeps you engaged. For fun, here are a few of my favorites:

“Ya know, if you’ve got these like fancy-dancy mustards and stuff like that… that’s an elite kind of thing. Okay? Miracle Whip is America.”

“Miracle Whip tastes like lotion, but sweet. And who wants a sweet, lotion sandwich?”

“Miracle Whip tastes like an exotic lady is kissing you, but she’s got a little bit of sugar around her mouth. And then at the end she goes, ‘Caliente!’”

Are you a Miracle Whip? Get a taste and decide.

The Last Mental Image (LMI) comes full circle to the main idea introduced by the FMI. (Remember, it’s not the reference you want to circle back to, it’s the idea.)

You can’t decide which camp you fall into unless you’ve tried the product, right? We’ll Miracle Whip has tickled your interest just enough that you’re likely to buy a bottle during your next trip to the grocery store.

Posted by Dana Sanchez at 9:00 PM No comments:

Sooner or later the “truth” about Creatives (those individuals that write great commercials), gets out - and confirms the fact that they (we) are a unique group. It seems that "Creativity and Schizophrenia Share Similarities in the Brain”. The article, which appears in Bloomberg Business Week, written by Alan Mozes, shares the link between D2 receptors and dopamine in creative individuals and those with the mental illness.

So Creatives, unite, and when one of those people on the other side of the office drops by, just let them know how crazy good you are.

Posted by Dana Sanchez at 9:47 PM No comments:

TURD IN THE PUNCHBOWL TECHNIQUE

Tell people what they already know, but aren't saying. Is there something about your business, industry, location or team that is hurting your business? Can you bring it to light by actually discussing it? In talking about your shortcomings, you prevent competitors from doing it and you seem REAL to your customers. If the customer knows that you are real, then they feel like they can trust you.

Allstate Insurance ran an ad campaign discussing some of these items in the auto industry. They "dropped the turd in the punchbowl." .... "Don't you HATE how you can be a fantastic driver for years and with ONE accident, your PREMIUM goes UP? What about if your premium went DOWN if you DIDN'T have an accident instead of just UP when you DO??"

The moral of the story is....BE HONEST WITH YOUR CUSTOMERS. If you don't know where there are areas that you can improve, ask your customers and friends about your industry as a whole, not just your company.
Posted by Dana Sanchez at 5:49 PM No comments:

No matter what business or sales environment you're in, if you commit to Go BEYOND what your competitors are willing to do...you will be successful.

One bank here in Missouri broke all the banking rules and shook the industry with their success. Commerce Bank didn't offer the lowest interest rate in their market....they never made an acquisition either and yet they were one of the fastest growing banks in the US.

How'd they do it?

They tried thinking about PEOPLE before PROFITS. Their mission statement is threefold, "Be Accessible, Offer Solutions, Build Relationships."

They open their branches 7 days a week...while their competition is only open for 5 maybe 5 1/2 days...they think about their customers convenience.

They spend more money training their staff making sure everyone is friendly and jolly.

They provide FRESH coffee to everyone, give away newspapers, and installed coin changing machines. By simply offering better services and going that extra mile Commerce Bank has grown by leaps and bounds even though they offer a worst interest rate than the bigger banks.

They provide an experience to people that no other bank does and in the process it has made people extremely loyal to them.

There's no need to get into a pricing war if you offer a level of service and care that is unmatched by the others. Do a little more than what's expected...go the extra mile...Think PEOPLE before PROFITS...that's what Commerce Bank in Missouri has done. Well done Commerce bank. Well done!
Posted by Dana Sanchez at 10:35 PM No comments:

After working closely with business owners, agencies, all forms of media throughout my years as a small market radio advertising sales rep, I came to notice a gnawing sense of frustration amongst entrepreneurs who truly wanted to grow their business.

1. Many business owners lacked the time it took to manage their advertising. (They were too busy growing their business!)

2. And as an Advertising Rep with a developed list of hundreds of accounts to service…I too was stretched beyond what I could manage. (And so were most of my colleagues!)

Because I took a personal interest in writing and producing great sounding radio commercials, I wrote probably 90% or more of ALL my clients’ commercials. Which was great, as long as I only had a limited number of businesses to work with. But as my account list grew, the level of personal service I could provide simply waned. I could do a pretty ‘good’ job for many, but couldn’t do an excellent job for all.

Hence the idea for being an independent ‘Marketing Consultant’ was conceived.

For many of my clients, hiring an Advertising Agency isn’t an affordable option. So I work with a small number of area businesses helping with many aspects of their marketing including creating and implementing effective advertising campaigns, working directly with their advertising reps to ensure their message remains consistent, developing and implementing social networking tools and on and on.

I created this BLOG & my facebook page NOT TO SELL my services, but to ADD VALUE to business owners and advertising sales reps alike. I will be posting little ‘nuggets of wisdom’ I have learned from many people over the years and also ideas and strategies that I hope will help you be more successful!

Posted by Dana Sanchez at 10:19 AM No comments: 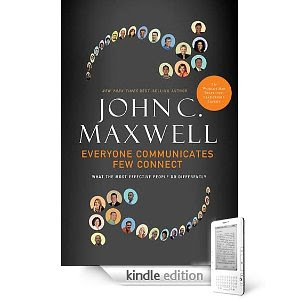 People don't care how much you know, till they know how much you care. No matter WHAT product or service you sell...your customer HAS to feel that you genuinely care about them as a person, and that you have their best interests at heart, before currency is exchanged. That's probably why you started your business anyway, right? Because you saw a need to help people and you rose to the challenge.

The truth is, you can go on and on about how great your business is....how many customers you have, how many awards you've won...but all they're thinking is "So what? What can you do for me?"

Get to know your clients. Ask important questions about them and be sincere. There's a really great book out right now that I've been reading called "Everyone Communicates. Few Connect." By one of my favorite Authors, John C. Maxwell. If you struggle in this area, I encourage you to read this book! You can learn to be a better connector.

When people sense that your motives are pure, and that you really care about them, in time...you'll create a life long customer and friend.

So let's get over ourselves. Nobody is as impressed with us as we are. Let's start being impressed with others for a change...and watch your business grow!
Posted by Dana Sanchez at 12:08 AM No comments:

Promote Your Page Too